Bobby is an actor, presenter, host and former DJ. More commonly known as the host of History Channel Asia’s very own original series Celebrity Car Wars. He has been hosting a myriad of events for over 12 years. To date, Bobby is still the only Caucasian celebrity to be seen across English, Mandarin and Malay television channels in Singapore.

Joey is an international model turned TV host. Her hosting prowess has earned her a number of top local and international shows on TV and stage for the recent years. Joey is also an advocate of female empowerment, gender equality, and children and animal rights.

Sam is a radio jock and TV personality who is most known for being one of the three DJs of Boys Night Out at Magic 89.9. He also serves as a guest host for numerous variety and talk shows aired by the biggest television networks in the Philippines. To date, his social media channels on Twitter and Instagram are two highly-followed pop culture and entertainment hubs by a mix of young and older fans.

Alston Stephanus Accessories is a luxury brand of finely crafted jewelry that pushes the conceptual boundaries of design; nothing less than bold will do. Creative Director Alston Stephanus uses the highest quality materials to custom make each elegant accessory for his clients. 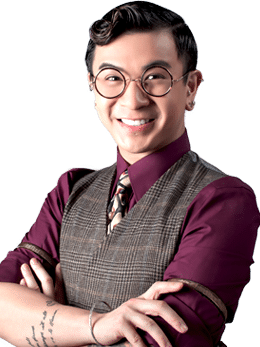 Alston Stephanus Accessories is a luxury brand of finely crafted jewelry that pushes the conceptual boundaries of design; nothing less than bold will do. Creative Director Alston Stephanus uses the highest quality materials to custom make each elegant accessory for his clients.

Spending his childhood years between Jakarta and Singapore, Alston Stephanus has traveled the world and studied extensively in London and New York, providing him with a set of global philosophies that influences his every couture creation. Spirited, strong and gutsy, Alston’s vivid designs are truly pioneering.

Continuing to create for pageants, Alston Stephanus Accessories is the official crown and accessories designer for Miss Tourism Indonesia and creates a different crown every year. Being the official crown sponsor for Miss Earth Indonesia, in 2013 Alston collaborated with formalwear fashion designer Rusly Tjohnardi Atelier and hair and make-up artist Hendro Revco to create a gold-metal-winning National Costume, which went on to display at Versailles Palace in the Philippines.

Alston Stephanus Accessories has had many achievements over the years, including a three-page spread in Vogue Italia in January 2012. Alston also designed a female Darth Vader costume for HighEnd Magazine’s The Masterpiece, Strikes Back: A Fashion Exploration in December 2014. And creating seven masks used in an art-opening exhibition for Japanese manga artist Junko Mizuno at the Nucleus Gallery in Alhambra, California was a highlight of 2016. He is currently working on designing accessories for Sisters of House Black: A Harry Potter Fan Film, to be filmed in the United Kingdom later on this year.

Manny is a professional fashion designer who comes from the family who established Halasan Metal Craft in Meycauayan, Bulacan. He is currently one of the top crown designers in the country. He was a part of Project Runway Philippines Season 3 and has been sharing his talents with various charities and fashion shows both locally and abroad.